I love digging through old photos, i often find little treasures i had forgotten about for years, it is also a time to reflect on past experiences and to see how i have grown (hopefully) as a photographer. I was digging around this morning and came across some images i had pushed to the back of my mind (and my hard drive) for a reason. It was 2007 and the circus was in town, i travelled down to Tempe with my partner to hand out some leaflets at the show.

I proudly huffed up there, camera and anti circus propaganda in hand when i was stopped in my tracks by a site that is imprinted into my brain til this day. There, in a small confined area were two massive elephants. I had no control of myself, i turned away and buried my face in my partners chest and wept. I was rather surprised by my reaction as i had seen footage of elephants in circuses before and thought I could handle it. Wrong. See i grew up in a civilised community unlike that of the whole of NSW.

In the ACT animal circuses have been banned for as long as i can remember, so my childhood experiences with the circus were that of acrobats and clowns (which oddly enough scare the hell out of me today.) We didn’t have ‘tamed’ lions being whipped, we didn’t have elephants standing on their hind legs wearing stupid hats and we didn’t have miniature ponies parading around.

So when i saw these beautiful animals kept in this way, rocking back and forth with a soulless look in their eyes, i crumbled. 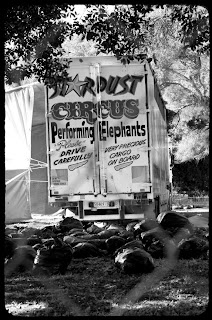 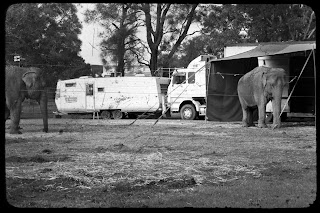 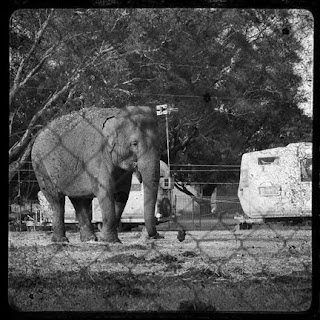 ‘There is growing resistance against the capture, confinement, and use of wild elephants. Animal rights advocates allege that elephants in zoos and circuses “suffer a life of chronic physical ailments, social deprivation, emotional starvation, and premature death”.
Conditions for circus elephants are highly unnatural – confinement in small pens or cages, restraints on their feet, lack of companionship of other elephants, etc and, perhaps as a result, there are instances of them turning on their keepers or handlers. ‘ – Wiki

Approx a year after these images were taken, one of these 2 elephants killed her trainer and was moved the Western Plain Zoo. 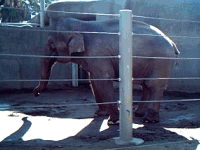 Rocking behaviour doesn’t stop with elephants, it is seen in many animals kept in captivity, check out the buggies in your local pet store… they are nuts i’m telling you.